New advice from CDC comes as some states close schools and restaurants and Donald Trump says: Relax, were doing great 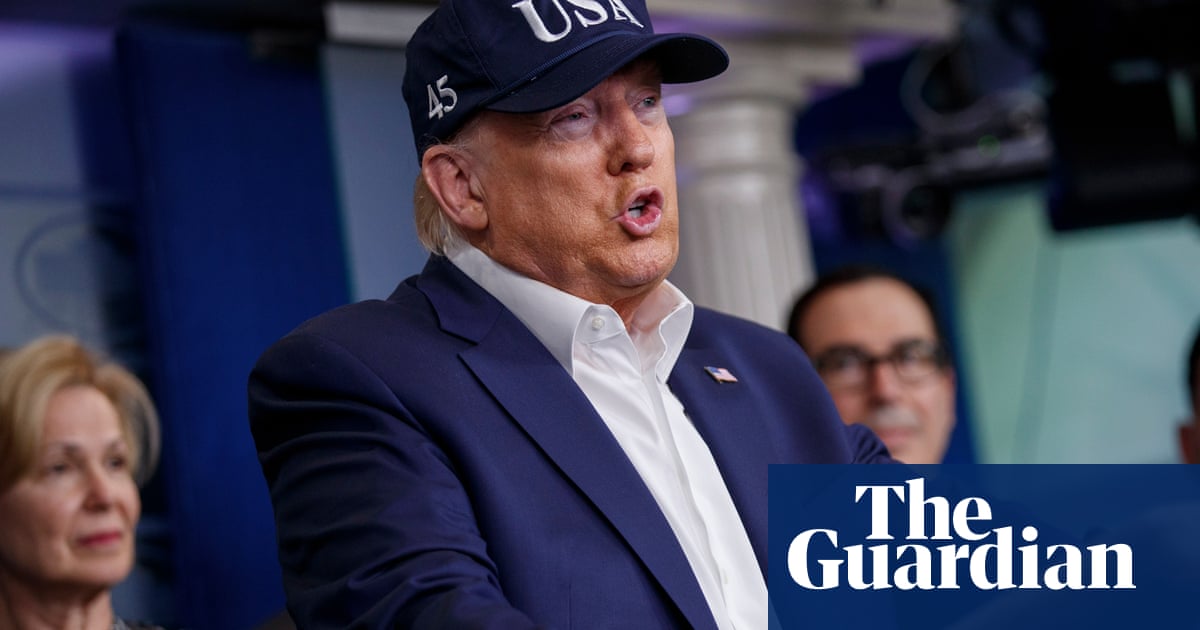 The US Centers for Disease Control (CDC) has recommended that gatherings of 50 people or more be cancelled or postponed for the next eight weeks because of the coronavirus pandemic, as officials across the country continued to curtail freedoms to fight the coronavirus outbreak.

The CDC guidance was soon followed by an announcement on Sunday night that several Las Vegas hotels and casinos would suspend operations, and New York City would limit restaurants, bars and cafes to only offer take-out and delivery starting on Tuesday, and nightclubs, movie theaters and other entertainment venues would close.

These places are part of the heart and soul of our city. They are part of what it means to be a New Yorker, Mayor Bill de Blasio said in a statement on Sunday night. But our city is facing an unprecedented threat, and we must respond with a wartime mentality.

Moments later, the Washington state governor, Jay Inslee, took a similar step, announcing restaurants and bars would be limited to take-out only until the end of March, and entertainment and recreational facilities such as gyms would also close. Illinois, Ohio, Massachusetts had already taken similar steps.

MGM Resorts International, which operates several vast Las Vegas hotels and casinos including Bellagio and Luxor, said it would begin to suspend operations in the city from Monday.

The CDC, the federal public health agency, published its new recommendation on its website on Sunday evening as officials across the country continued to curtail many elements of American life to fight the outbreak, with governors closing restaurants, bars, and schools and a government expert saying a 14-day national shutdown may be needed.

The CDC recommended that for the next eight weeks, organisers (whether groups or individuals) cancel or postpone in-person events that consist of 50 people or more throughout the United States.

The events of any size should only be continued if they can be carried out with adherence to guidelines for protecting vulnerable populations, hand hygiene, and social distancing. When feasible, organisers could modify events to be virtual.

This recommendation does not apply to the day-to-day operation of organisations such as schools, institutes of higher learning or businesses.

The new advice came as the nation sank deeper into chaos over the crisis. Hours earlier, Donald Trump urged Americans to refrain from panic buying basic supplies, as the administration announced plans to expand testing for the virus and health officials were preparing to release advanced guidelines on how to mitigate its spread.

During a press briefing at the White House on Sunday evening, Trump again appeared to downplay the threat of the virus.

Relax, were doing great, he said, during short, meandering comments that focused mostly on celebrating a decision by the Federal Reserve to lower interest rates. It all will pass.

But the presidents remarks stood in marked contrast to his lead infectious diseases expert, Dr Anthony Fauci, who used the same conference to warn: The worst is ahead for us, describing the crisis as reaching a very, very critical point now.

Earlier in the day, Dr Fauci had declined to rule out a national lockdown of bars and restaurants as he urged more aggressive measures, similar to those in Europe and elsewhere, to contain the virus.

I think Americans should be prepared that they are going to have to hunker down significantly more than we as a country are doing, said Fauci, a member of the White House task force on combating the spread of coronavirus. He heads the National Institute of Allergy and Infectious Diseases at the National Institutes of Health.

There is no indication Trump is considering such a move.

On Sunday, travellers returning from overseas trips were stuck in line for hours at major airports for screenings, causing them to be crammed into just the kind of crowded spaces that public health officials have been urging people to avoid.

In a sign of the impending economic gloom on the horizon, the Federal Reserve slashed its benchmark interest rate to near zero.

Parts of the country already look like a ghost town, and others are about to follow as theme parks closed, Florida beaches shooed away spring breakers, Starbucks said it would accept only drive-thru and takeout orders and the governors of Ohio and Illinois ordered bars and restaurants shuttered.

Californias governor asked the states bars and restaurants to do the same, but didnt order it. New Jersey and elsewhere are considering similar measures.

The time for persuasion and public appeals is over, Illinois governor J B Pritzker said. This is not a joke. No one is immune to this.

South Carolina closed its public schools until the end of March while Massachusetts announced that public and private schools would be closed from Tuesday until 6 April.

New York City also announced it would close the largest public school system in the US today until at least 20 April, sending more than 1.1 million children home.

California governor Gavin Newsom has directed the closure of all bars, wineries, nightclubs and brewpubs in the state and called for everyone aged 65 or over to stay in home isolation.

The worldwide outbreak has sickened more than 162,000 people and left more than 6,000 dead, with thousands of new cases confirmed each day. The death toll in the US has climbed to 64, while infections passed 3,200.

Meanwhile, harsh criticism rained on Trump and his administration on Sunday from state and local officials over long lines of returning international passengers at some US airports that could have turned them into coronavirus carriers.

Chicago mayor Lori Lightfoot lambasted the administration for allowing about 3,000 Americans returning from Europe to be stuck for hours inside the customs area at OHare international airport on Saturday, violating federal recommendations from the CDC that people practise social distancing.

The passengers, many of them rushing home because of fears they would be stuck in Europe, were screened before they were allowed to leave the airport.

Long lines also formed Saturday in Boston, Dallas and others among the 13 airports that are accepting return flights from Europe.

People were forced into conditions that are against CDC guidance and are totally unacceptable, Lightfoot said.

But the situation improved markedly on Sunday at OHare and elsewhere. Acting Homeland Security secretary Chad Wolf said wait times went down to 30 minutes after processes were adjusted and extra personnel sent to airports funneling passengers from overseas.

Oliver Laughland and Associated Press contributed to this report