Are flying taxis ready for lift-off?

Are they really the answer to urban travel? 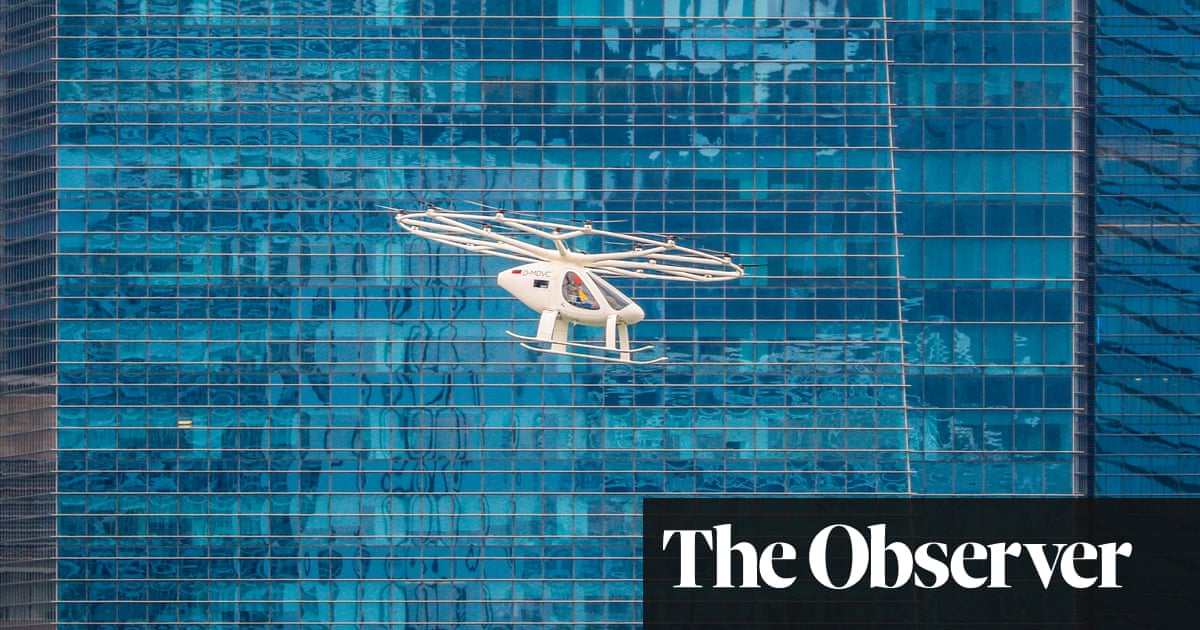 Its right up there with meal pills, jetpacks, robot butlers and colonies on Mars. Since at least 1962, when the TV cartoon characters George, Jane, Elroy and Judy Jetson first took to the skies, flying cars have been a staple of speculative visions of the future. Designs for dozens of small, affordable, personal flying machines were unveiled in the latter half of the 20th century. Few became airborne and none took commercial flight.

Now, however, a form of flying car is set to escape the clutches of eccentrics and the confines of science fiction. A handful of well-funded startups, some backed by major aviation and car companies, have carried out test flights of electric vertical take-off and landing (eVTOL) aircraft. Piloted air taxi and shuttle services are expected before 2025. Uber says it expects to be operating aircraft without pilots by around 2030.

Heavy hitters including Toyota, Hyundai and Boeing are giving eVTOLs what looks like unstoppable momentum and this raises some important questions. Where will eVTOLs fly? Can operators persuade us their aircraft are safe and quiet enough to fly regularly over our homes and schools? And will they be just a premium service for the rich or a means of mass transportation with the potential to transform the way we live in positive ways?

One thing that is clear is that ground-based transport infrastructures are creaking at the seams. Annually, drivers in London waste an average of nine-and-a-half days 227 hours stuck in traffic. Workers in Los Angeles and Sydney spend the equivalent of seven working weeks commuting a year.

Industry enthusiasts dont think eVTOLs will have a major impact on congestion within a few years, but they do believe they can play a role in the longer term. Ground infrastructure simply cannot keep up with increasing urbanisation and the congestion it is causing, says Michael Cervenka, chief operating officer at Vertical Aerospace, a Bristol-based startup. We will start small and it is not a magic bullet, but we see an opportunity for eVTOLs to be part of the solution to pent-up global demand.

Some companies believe that rapidly persuading city dwellers to feel relaxed about seeing aircraft regularly zipping above their heads may be a leap too far. Vertical Aerospaces third prototype, which it plans to fly later this year, will have a range of 100 miles to target quicker intercity journeys such as Manchester to Leeds, or London to Milton Keynes. US-based Joby Aviation is planning a range of 150 miles, while German company Lilium, with its range of 200 miles between charges, says it could reduce journey times between London and Bristol to half an hour.

Others are going straight for what they see as lucrative, congested routes across cities. Uber has announced plans for Uber Air eVTOL services in Dallas, Los Angeles and Melbourne by 2023. In January, it announced a deal with Korean carmaker Hyundai, which plans to mass produce eVTOLs for the Uber Air network. German company Volocopter, which carried out a first manned urban test flight for its two-seater eVTOL in Singapore in October, is also planning for short city hops.

There are three broad classes of vehicle: wingless multicopters, which are best suited for shorter journeys and rely on rotors for both vertical and horizontal movement; lift and cruise eVTOLs, which use rotors to hover and wings for more efficient cruising; and more complex vectored thrust systems that have wings and fans or propellers and can swivel their thrust generators.

One thing the rivals agree on is that services will run between take-off and landing pads, or vertiports, not passengers initial setting-off points and final destinations. Nobody is talking about point to point, says Graham Warwick, executive editor for technology at Aviation Week. They dont think they will ever be quiet enough to fly into peoples backyards.

Flying taxi companies are all too aware that at present most people do not differentiate between eVTOLs and helicopters and so they are tainted by noisy association. The main reason we dont see helicopters flying around cities all the time is that people dont want to be exposed to the noise they make, says Volocopters Fabien Nestmann.

In a paper published in 2019, Volocopter claimed its vehicles low weight, high rotor surface area and low rotor tip speed would generate around a third of the noise of a helicopter. Remo Gerber, Liliums chief commercial officer, claims his companys aircraft is seven to eight times quieter than a helicopter of comparable size. Some rivals are sceptical that Liliums large vehicle can achieve that.

Convincing passengers that the technology is safe is probably the biggest challenge facing the industry. Last July, the European Aviation Safety Authority (EASA) published a set of conditions for the certification of eVTOLs. To operate over urban areas, manufacturers will have to demonstrate a failure rate of less than one per billion flying hours the same as large commercial airliners. To achieve this, they are building backup rotors, engines, batteries and flight control systems into their designs. Thankfully for manufacturers, regulatory approval will not involve a billion hours of test flights, but is based on the track record of existing components.

Manufacturers and operators are acutely aware they still have much to do to get both paying passengers and the wider public onside. We need to show people the benefits of a faster, more predictable and safe form of transport that has little or no impact on the lives of people on the ground, says Nestmann.

Industry leaders also know they will struggle if only the wealthy can afford to fly. Volocopter says that for a journey from central London to Heathrow, it would expect to charge 100-200. Both Lilium and Vertical Aerospace say starting prices will be similar to first-class rail. Uber says it expects initial prices per mile to compare with its Uber Black executive service, but then close to match UberX prices within two years. On that basis, a 20-mile trip from central London to Heathrow airport including an Uber Air flight would cost around 88 in 2023, falling to 30-35 around 2025. Eric Allison, head of Uber Elevate, says such low prices will be possible thanks to the low maintenance costs of distributed electric propulsion, the ability to incorporate flights into journeys that include Uber cars through its existing platform and pilotless flights. Our simulations suggest we can drive utilisation and fill seats through our ground network, he says.

Whether Allison is being realistic, optimistic or just engaging in public relations is hard to know. This is going to start as a premium service for businesspeople, says Aviation Weeks Warwick. But the industry will need to get prices down to reasonable levels quickly before it becomes seen as something only the rich can afford.

One way to do that is to fly without pilots, monitoring aircraft from control centres on the ground. To really bring costs down and make this an affordable form of transport for the masses, you have to get the pilot out, says Warwick. The question is, will people fly in something without a pilot? Nobody really knows the answer to that.

Uber expects passengers to be ready to go pilot-free in about a decade. We dont think autonomy is practical from a regulatory and potentially a technology standpoint by 2023, says Allison. But we see self-piloted aircraft with remote monitoring as an inevitable direction, which will make the economics even better and come, we think, end-2020s or 2030.

Some thrill-seeking passengers wont have to wait that long. In fact, dozens have already flown pilotless in trials carried out by the Chinese company EHang, mostly in China but also in the Netherlands, Austria and Qatar. The New Zealand government has agreed to trials of passenger-carrying eVTOLs in the Canterbury region by US company Wisk, subject to aircraft certification.

In a statement, Megan Woods, New Zealands minister for research, science and innovation, highlighted Wisks vision of a greener, emission-free way for Kiwis and visitors to New Zealand to get around. Liliums Gerber also sees eVTOLs as environmentally friendly. We will have a similar end-to-end carbon footprint as electric cars, but we dont need millions of tonnes of concrete and steel to build connections between places.

That may be true, but eVTOLs thirst for power and need to operate frequently to recoup costs means they will work their batteries harder than cars. Batteries are likely to need replacing after a year to 18 months and making lithium ion batteries emits a lot of CO2.

Some manufacturers do believe the technology can bring positive changes to our lifestyles, however. If people can travel much more quickly, we can unlock a lot of potential in medium-size cities that today are seen as secondary, says Gerber. It has the potential to relieve the pressure on the biggest cities and provide opportunities for people to live and work in new ways.

Such visions of transformative decentralisation would require mass production of vehicles, huge infrastructure building and widespread adoption, all of which are, at best, a long way off. It does, however, seem likely that eVTOL flying taxi and shuttles will begin operating in the next few years. Less certain is whether the planned public acceptance campaigns will succeed and whether the industry can scale up and reduce prices as rapidly as it needs to to avoid eVTOLs being labelled as a billionaires plaything.

Theres certainly a lot of hype, but I think the hype is in the timeframe, not in the technology, says Warwick, who has been covering the sector for Aviation Week for close to a decade. Im pretty certain we will see initial commercial services with a relatively small number of vehicles some time between 2023 and 2025. But as for the long-term vision of mass transportation, I think it will be some time after 2035 before we get to any sort of scale.