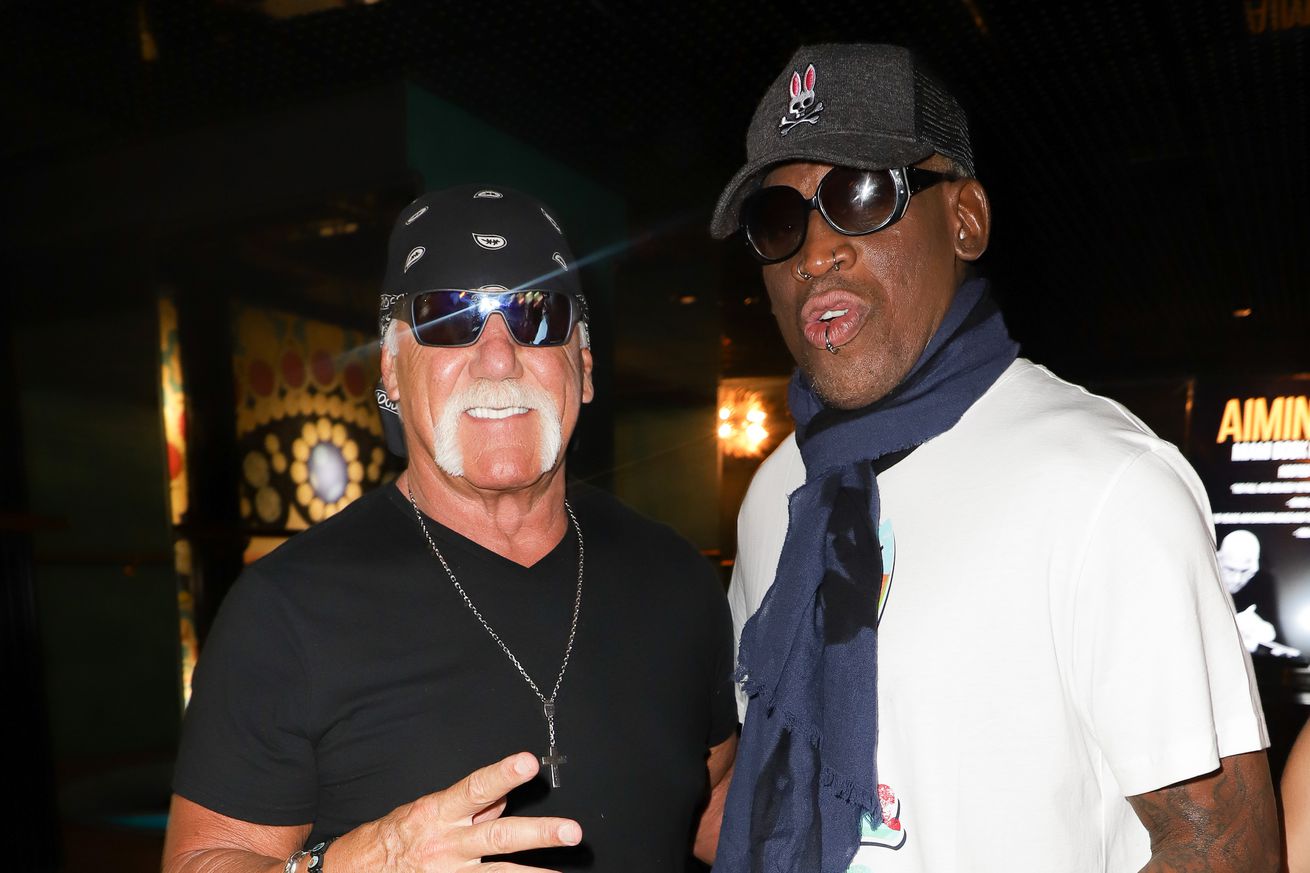 A weird chapter in NBA and wrestling history, all in one.

Depending on your age there was no better era in professional wrestling than the late 1990s, but even if you disagree with that statement it’s undeniable that the nWo (New World Order) was the coolest faction in the business. It transcended wrestling and took over popular culture in a way wrestling hadn’t before, or since.

On Sunday night The Last Dance touched on Dennis Rodman’s involvement in the group, which became so engrossing that he skipped practice during the NBA Finals to ensure he could be ready to perform in the ring in 1998.

What was the nWo?

In the mid-late 1990s a battle was brewing between the incumbent face of professional wrestling the WWF (now WWE) and WCW. Owned by Ted Turner, WCW took its roots from traditional southern wrestling, but largely failed to gain a major foothold in the ratings. In an attempt to make the company successful, Turner and WCW opened its wallet and began giving out absurdly large contracts to some of WWF’s biggest stars to make them jump ship, also making these contracts guaranteed — which was unheard on in the business.

From 1994-98 WCW signed the likes of Hulk Hogan, The Macho Man Randy Savage, Razor Ramon (Scott Hall), Diesel (Kevin Nash), and countless others. This alone wasn’t enough to propel WCW past WWF, but what came next was.

Hall and Nash jumping ship broke down professional wrestling’s venerated fourth wall, trashing their former company in the process. Arriving like a street gang, the nWo used guerrilla tactics and violence to “take over” WCW, and were so convincing fans were left wondering whether the angle was a reflection of real life. For two months Hall and Nash disrupted WCW, all while teasing the near arrival of a “third man,” an architect working behind the scenes to orchestrate the WCW takeover, which was revealed to be none other than Hulk Hogan.

The image of Hogan leg dropping his long-time friend Macho Man Randy Savage is burned in the minds of wrestling fans. The All-American super hero became the biggest villain in the wrestling world, and this was the catalyst for the nWo’s rise to prominence. Hogan, Nash and Hall were the perfect trio, and made it not only okay to like professional wrestling — but cool.

Numbers have never been officially revealed, but it’s been purported that over 16 million nWo shirts were sold in 1997 alone. This phenomenon was bigger than wrestling, and soon everybody, inside of wrestling and out, wanted to be a part of the nWo.

With momentum on their side, WCW wanted to capitalize on pushing the nWo into the mainstream as quickly as possible. This included enlisting the help of celebrities to promote the brand, and the nWo’s devil-may-care attitude aligned perfectly with Rodman’s off-court personality.

The summer of 1998 was the perfect time for WCW to pull the trigger on a massive WCW/NBA crossover event. Rodman, who was in the middle of the NBA Finals against the Utah Jazz, took his role with the nWo so seriously he flew from Chicago to Detroit to appear on Monday Nitro live, in the middle of the series.

Rodman going to a professional wrestling event in the middle of a NBA Finals series seems absolutely ludicrous, but his Bulls teammates knew that was just part of the give-and-take with having Rodman on the team. Steve Kerr explained on The Last Dance that while it wasn’t uncommon for Rodman, it was a sign the Bulls were falling apart:

“We sort of understood he was his own man. He did so much for the team, but to do it during the Finals, that was another indication this was all coming to an end.

It’s unclear if Rodman’s decision to skip practice led to him coming off the bench in Game 4, but it didn’t make much of a difference. Even entering the game in a rotational role Rodman played 30 minutes and finished with 14 rebounds.

After the NBA Finals (which the Bulls won), WCW hyped up the promise of a Rodman/Malone rematch — this time inside a ring. At the Bash at the Beach pay per view in July the pair would face off in a tag team match that featured Hogan and Rodman teaming up to face Diamond Dallas Page and Karl Malone. The nWo ultimately won in the main event, and Rodman would not appear in a ring for another year, when he returned in 1999 and lost to Macho Man Randy Savage.

While the goal was to make the nWo transcend the world of wrestling and garner more appeal than ever, putting guys like Rodman in the faction is viewed as the moment the nWo “jumped the shark,” and took the luster away from the once-great group.

The downfall of the nWo.

There are numerous factors that led to the demise of the nWo as the premiere wrestling faction, but it ultimately comes down to being crushed until its own weight and mismanagement. WCW used the nWo as a story tool to rotate dozens of stars through to make them popular, eventually splintering the group into multiple rival factions including the red and black of the nWo Wolfpack, and the “Latino World Order,” which was led by legendary wrestler Eddie Guerrero. Eventually fans lost interest, there was too much rapid change and illogical story, with behind the scenes infighting tearing not only the nWo, but WCW as a whole apart.

More bad decisions led to the death of the company, and in 2001 WCW was sold to Vince McMahon and the WWE. Attempts to revive the nWo have been made in the years since, but never managed to capture fans the way the original iteration did. Now a relic of a bygone era, the nWo of 1996-98 remains the most compelling era in professional wrestling, not only in terms of the larger WCW vs. WWF feud — but how it pushed the industry away from the comic book style characters of the 1980s and early 90s, instead putting more “real people” on screens that fans could identify with.

Without the nWo it’s unlikely we ever would have seen the rise of Stone Cold Steve Austin and countless others. Dennis Rodman is a part of that legacy, and deciding to skip out of practicing for the NBA Finals allowed it.