‘It’s like a remote sleepover’: my week meeting quarantined strangers

The Quarantine Chat app pairs users by phone with strangers around the world in some degree of isolation, a one-on-one human connection in a time of chaos 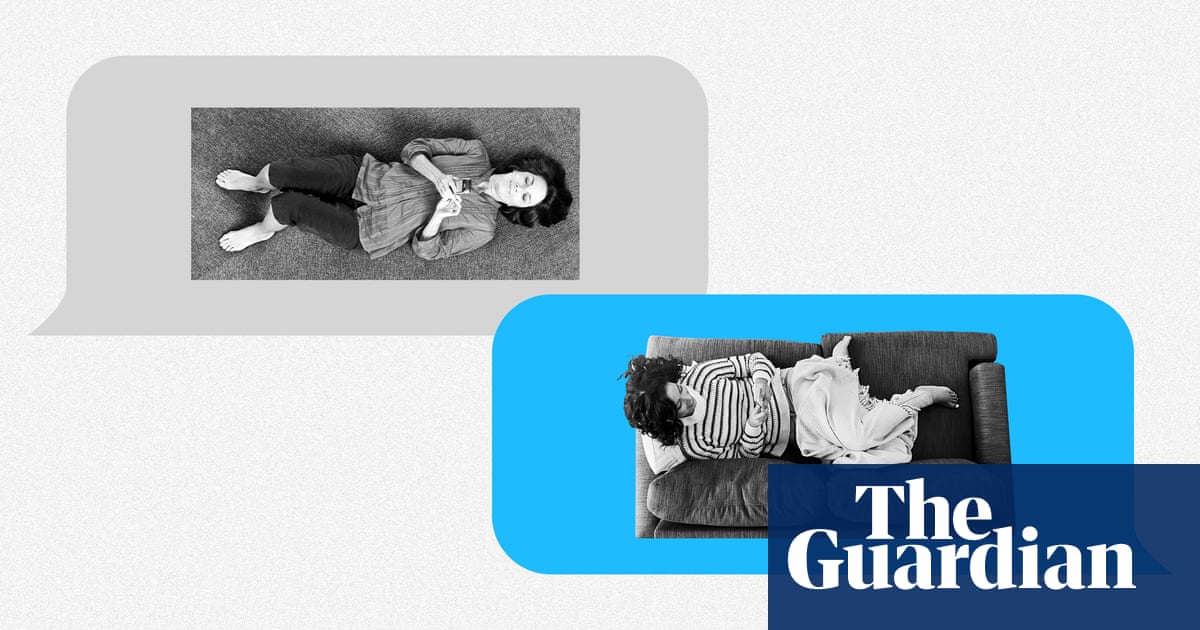 Just before everything changed, one week ago, I was out in the backyard with my kids. I remember that the moon rose early and bright, and when I pointed to it, my five-year-old said confidently: Thats not the moon. Its a quarter floating in the sky. It took me by surprise, the poetry of his words, and so we giggled and tried to pluck it from the branches of a tree.

The next morning, we woke to a world transformed.

Last Thursday was the first day I kept the kids home from school, though schools in Arizona were technically still open. It seemed the prudent thing to do. Italy was officially in crisis, having logged hundreds of Covid-19 deaths in a single day. We began to hear the phrase social distancing. While my first thought was protecting my parents and grandmother, who are at risk because of their ages, my second thought was about art and connection. I wondered immediately, what will we make separately, together in this strange, horrifying time?

I found Quarantine Chat soon after an app that pairs you by phone with a stranger from somewhere in the world, also in some degree of isolation. Sign up and Quarantine Chat (via the app Dialup) will phone you randomly, approximately once per day. Or sign up for themed calls at scheduled times read Tarot cards with a stranger on Thursdays; read poetry together on Tuesdays; compare weekend projects on Saturdays; chat about farming on Sundays.

Created by the artists Danielle Baskin and Matt Hawkins, Quarantine Chat is a response to the coronavirus causing people in cities to be in quarantine, isolating humans from each other. Though Baskin and Hawkins began Dialup a year ago as a way to connect communities in random one-on-one calls, Quarantine Chat officially launched on 1 March.

We thought it was for cheering up people in self-isolation or in quarantine, but it became more relevant as cities started mandating lockdown, said Baskin. Weve been hearing so many stories from people using it Someone in Connecticut spoke to someone in London and exchanged recipes. Someone in Pakistan matched with someone in Oman while he was out grocery shopping.

To explain why this was instantly compelling to me, Ill say this: I was a teenager in the 1990s, during the nascent era of AOL chat rooms, when corresponding with anonymous strangers was a common after-school activity. I liked the phone, too, and I spent so many hours talking to friends and crushes What are you thinking about? I dunno, what are you thinking about? that the shape of the phone would become imprinted on my face. Quarantine Chat seemed a nostalgic echo of that time, providing a one-on-one human connection during a time of chaos.

My first call came Saturday afternoon. I picked up the phone to some jazzy elevator music and a recorded message inviting me to talk to a stranger about my weekend projects. And suddenly I was talking to Antony in Moscow. It was almost midnight there, cold and dark, he said, with just a bit of snow on the ground. I told him about the blue Arizona sky, the smell of orange blossoms wafting through the open windows, the midday sun. We talked to one another as we worked on our projects. Mine involved disinfecting doorknobs. He was building an app. I told him Id just begun to get concerned about coronavirus. He said he was staying away from his parents because of their age, but that he wasnt too worried yet. We talked about art my writing and his watercolor paintings of mountains and oceans, places he has never been. After 45 minutes, my children began demanding snacks. Before we hung up, Antony told me: I think, just dont panic. But if you can write about this time, you should.

The day unrolled like thread. I scrubbed and did laundry and watched the news, which seemed to be constantly breaking. I began to doubt the possibility of additional grocery store runs and took everything out of my pantry to assess my supply. I set a trap for the mouse who had eaten through part of my toilet paper stash overnight.

I had just turned off the lights in the house when my phone rang. Have I got a story for you, said the woman on the phone, who turned out to be E from California. Weeks ago, E was exposed to Covid-19 at work and became symptomatic. When she went to the hospital for a test, she was escorted into an isolated exam room by nurses in hazmat suits. She could not leave the room even to use the bathroom, so they brought her a toilet seat with a bucket attached. They swabbed her, took chest X-rays, and sent her home to quarantine. After a week and a half in home quarantine, she was still waiting for her test results.

At home, she grew sicker, and there was a moment when she wondered if she would die. I thought, is this it? she told me. And then I thought, what the hell am I doing with my life?

In that moment, it was so clear. She didnt want to spend her life working in an office. She wanted to be outside. She wanted to ride her dirt bike every day. Maybe, she said, when this is all over, shell go back to her rural acreage on the east coast, back to her kind neighbors and her rescue horse. We wondered out loud to each other: how many times have we made decisions to follow a lover or a job? What would we choose instead if we listened to the deepest part of ourselves?

The gift of this time is to really think about what is important, and who is important, she said. We talked until we were both falling asleep Its like a remote sleepover, she laughed and then we said goodnight.

I woke up to a slew of breaking news alerts on my phone, new death tolls, a stock market freefall, the emergence of the hashtag #QuarantineLife. I also woke up sick runny nose, sore throat, earache, but not the telltale Covid-19 fever or cough. The world suddenly seemed particularly small. I began thinking of each part of my house as its own tiny country, the hallway with its terrible carpet running like a border between east and west. Panic began: What if long-term quarantine lasts through summer? How will anyone be able to afford rent or food or supplies? What if this is the beginning of a new society? What if we cant actually go vote?

To distract from impending doom, I sat with my kids at the kitchen table and we made a list of activities: Mario Kart tournament. Virtual Trivial Pursuit with my brother and sister-in-law 2,000 miles away. Write a letter. Read a book. Take a walk. Try to break the world record of trampoline bounces. Put on a play over FaceTime. Learn to play the guitar. Bake something.

At 1.30, I picked up a call from Quarantine Chat. The prompt asked us to think of something that used to scare us but doesnt any more, and to discuss it with our phone partner. If Im being honest, I said to a Postmates driver in Chicago, most of the things that used to scare me still do. We talked about what its like to stay inside day after day, about being worried about our parents, about incarcerated folks who dont even have soap or hand sanitizer. The thing that feels the strangest is that we are sitting ducks, I said. That this thing is moving toward us, that all we can do is hole up and wait.

Another call came a few hours later: a high school sophomore with a voice like a bird. From her window, she said she could see some cars and the tips of winter trees. Now that school was canceled, she wasnt sure what the next few weeks would look like. Maybe shed return to the novel she had been writing. The day before, she took what might be her last outdoor adventure with a friend. They had gone to an abandoned house explored the foundation, picked slowly through all the old junk. She wasnt sure how long shed be able to go outside. Most of her friends werent allowed to go outside at all any more.

On Tuesday, my cousin brought her kids to the lawn outside our grandpas new apartment to wave and blow him kisses. She sent a picture of the kids, pyjama-clad, holding a homemade sign that read We [heart] U Grandpa! Behind them in the photo, a tree was beginning to flower. Through a second-story window, I could just barely make out the lines of my grandpas striped shirt.

Wednesday, I was signed up for the poetry call, but it never came. The app has had so much traffic going from 60 users to more than 800 in two weeks that the artists reported working overtime to support new users and reply to app-related issues. Instead, I reached out to Lisa, a real-life friend who was also waiting for the poetry call, and we read poems to each other over the phone. I chose one by Minnie Bruce Pratt: I am alone in a solitude that vibrates like the cicada in hot midmorning.

Be respectful of the small insects, birds and animal people who accompany you.

Ask their forgiveness for the harm we humans have brought down upon them.

Outside, the sun went down, and the desert sky faded from pink to pale purple. I sat in the driveway and watched the last few crane flies bob through the air. Soon, they will be gone, and the cacti will flower, and the world will keep turning. And I will keep picking up the phone.