Not Having Enough Money Isn’t a Dealbreaker for Entrepreneurs 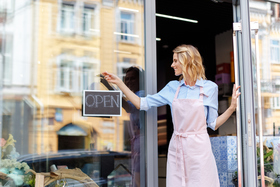 Whenever I get questions from eager young entrepreneurs about how they should get their start in business, I always recommend being born into a rich family. This answer is very tongue-in-cheek, of course, but my point is that money isn’t everything. If you’re like me and aren’t the product of a wealthy upbringing, there is still hope.

If my career has shown me one thing, it’s that extremely hard work (or determination) combined with a very high-risk tolerance (or grit) will get you anywhere you want to go in life. You just need to know where to channel your efforts and when to take risks. Despite what society may tell you, or what you want to believe, money isn’t everything. It can easily be spent, stolen, invested, and lost – here one day and gone the next. However, one asset that is impervious to all of these liabilities is your drive. And you don’t need much more than that.

As mentioned, I didn’t come from wealth, so I had to forge a path of my own and navigate through waters that were unfamiliar to me. Would money have made my entrepreneurial beginnings less stressful? Absolutely. Entrepreneurship comes with considerable sticker shock if you’re not sitting atop a mountain of money. While money might have helped to greatly reduce risk and abate my fear of never “making it,” starting Ashcroft Capital, a national multifamily investment firm, has been tremendously rewarding. I’m very grateful things worked out the way they did and I wouldn’t change a thing.

I credit a lot of this to my father. He started his own pizza shop in the small Pennsylvanian town I grew up in with barely two nickels to rub together. He eventually grew that shop into a local hot spot. He didn’t know how long his shop would stay open for, but he didn’t care. He had a vision, not a financial security net. He poured his time and energy into his business, letting his pizza, not his bank account, speak for itself. As I watched my father achieve small-town success, I knew that there was nothing better than running your own business. Entrepreneurship was in my blood.

Some people get lucky by having a financial leg-up over their competition, but I don’t actually know if I’d even consider that luck. You can throw money at a business, but that has no influence on its success. Remember Elizabeth Holmes? Maybe not by name, but does the company Theranos jog your memory? Holmes, who came from generational wealth, created her blood-testing company to revolutionize the healthcare industry. In what people are calling a “spectacular downfall” of a once-celebrated Silicon Valley unicorn, it eventually came out that the results of the blood tests were inaccurate, the company lost billions, and, as of last year, Holmes has a net worth of $0.

Holmes isn’t the only one who hoped she could hide behind her money; there are so many other stories like this. Don’t heed the advice of people who tell you that you need to have a lot of money in order to make a lot of money. Unless you’re born into it, there is never a “right time” to start a business. They say the same thing about having children. You’ll never feel wholeheartedly ready because fear always triggers doubt. Will I be a good dad? What if I fail and lose all my money? These are fears that a lot of people share, and it’s not a bad thing to have these thoughts – it just means you’re being cautious.

If you want to make something happen, you’ll find a way to pursue it. Here are some tips:

Success springs from skills, not money

My father didn’t buy patrons with his money, they flocked to his shop because he made the best pizza in town. When you create something that people want, the money will follow. But you must first develop the necessary skills and business savvy that will build the foundation on which you establish your entrepreneurial trajectory. This means starting small.

Before founding my firm that now has roughly $1B of assets under management, I started out as an intern. My goal wasn’t to jump into a risky endeavor right out of college in hopes it would be a sustainable salary for me; I wanted to build the groundwork for my development that I knew would create sustainability in the long-term. That coupled with a burning desire to work hard and a healthy sense of competition will get you to where you want to be – not the amount of money that’s currently in your bank account.

Your ego can be your biggest barrier

One key thing I credit as a strategy for growing my business has been putting my ego aside. This should be the case both before you start a business and while you’re running your business. The best interests of your company should always come first. That means being okay with uncertainty, with the struggles you will inevitably overcome along the way, and with the occasional failures that will happen. These aren’t what matter. What matters is what’s best for your company, not your pride. The instances that typically go against your ego are the ones you actually learn from.

The best interests of your company should always come first. Accept that you will have to lose even the smallest of battles in order to win the war. That is what will make you a better entrepreneur.

Be willing to put everything you have at risk

When you don’t have a huge financial safety net to fall back on, any endeavor you start will be a risk. But that risk, when it pays off, is worth the reward. When I first started Ashcroft Capital, I couldn’t take no for an answer. I had to think creatively because when you think about buying a $15 million property with less than $100,000 in your bank account (and no friends or relatives to lift you towards success), you have no other choice.

Starting your own company is one of the riskiest things you can do. It takes a special individual to be able to create an entire organization around an idea or passion of theirs, but what’s even more remarkable are the people who cultivate success from almost nothing. Take John Paul DeJoria, for example. You might not recognize the name, but he is the co-founder of the hair care company, John Paul Mitchell Systems. John started out as a newspaper courier and then a janitor; today, he’s worth over $3 billion.

It’s easy to forget that a lot of entrepreneurs come from nothing. We only hear about them after they’ve made it big. But it happens more than many people realize. Entrepreneurs don’t understand the meaning of the word “impossible” because they are willing to put everything on the line in order to bring their vision to life.

I never gave up, despite years of failing. I put everything I had – more than everything I had – at risk. The pieces came together and starting my own company has been the most satisfying and thrilling moment of my career so far. And it didn’t take millions of dollars to get started. It just took a willingness to try.